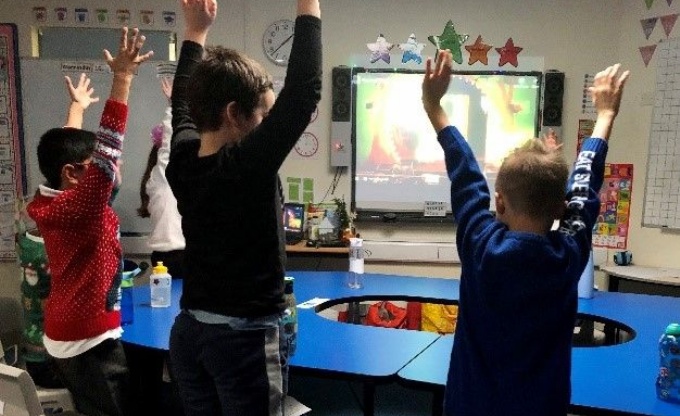 Just after lunchtime on Wednesday the 16th December, the whole school sat down to enjoy a live stream performance of ‘Rapunzel – The Lockdown Pantomime’.  Lots of laughter, cheering and booing ensued and clearly the children enjoyed themselves:

Mia HB3 - ‘I liked the acting; I thought that Rapunzel was really sweet – she loves to read books, and so do I!’

Chloe HB4 - ‘I thought that it was really funny; Prince Parp was hilarious!’

Stella HB4 - ‘I thought it was a little bit scary, but it still made me laugh. Fantasma was really funny and I liked his Tiktok glasses.’

Patricia HB9 - ‘I really enjoyed it; I liked that they twisted the story, but still kept to the main themes’

Stefan HB6 – ‘I liked it when Gothal turned into a baby and said “Goo goo gaga!’

Iris HB6 - ‘I liked it when Fantasma was filming the Prince on Tiktok!’

Jack HB11 - ‘I loved the dragon and silly noises and when Rapunzel hit Prince Parp in the face with the pan and said it was a real Pandemic!’

Ike HB11 - ‘It was funny when the Prince was called Prince Parp and farted.’

Emmanuella HB11 - ‘I loved the bit when Mother Gothel turned into a baby and said “stinky bum, bum.’

Eden HB11 - ‘I laughed so hard when Mother Gothel turned into a baby and made baby noises.’

Ugochi HB11 - ‘I liked how they made an old story seem up to date.’

Kerry – Anne, HB12 - ‘The panto was great, I liked the dancing and the background setting’

Narmada HB12 - ‘I liked the acting and the singing.

Abigail HB12 - ‘I thought that the acting was really good, their facial expressions in particular.

HB7 Ellie-May – ‘I really enjoyed it, it was entertaining.’

Caitlin: My favourite part was the singing and dancing and I liked it when they moved the castle around.

Arya: My favourite part was that they locked the evil old lady up and the dragon came!

Lukas: I liked the part where they did the tik-tok song.

Alfie: I liked it when the witch turned into a baby!

Robert: I liked the piano.

Brock: I liked the bit when the prince was on YouTube and said he wanted to play Fortnite!

Oscar: I liked it them playing the Eastenders theme song!

A big thank you to the Norfolk Music Hub and their associated partners for providing this wonderful opportunity for the children to enjoy some festive fun!